Our two prime hunting areas include the entire west coast of Admiralty Island National
Monument in unit 4 and one area in unit 1 C Coastal Mountain Range on the Southeast Alaska
Mainland. Admiralty Island is known for having the worlds densest population of Brown Bears.
Brown Bears taken typically range from 8 1/2 to 9 1/2 feet squared with some larger bears taken
occasionally. Depending on weather conditions our average success rate has been 90% over the
last 6 years. The 2015 and 2016 seasons have been 100% successful with bears averaging nine
feet squared.

With our two 18 foot Lund skiffs equipped with new 40hp Yamaha motors we can cover miles of
coast line ranging as far as 30 miles from the mothership during spring hunts. Brown Bears are
coming down the mountains from their dens to feed on sedge grass hungry after hibernation.
Glassing the snow covered mountain sides for tracks leading to the beach, bears are usually
spotted from the skiff along beaches and tidal meadows.

During fall hunts we stalk through the rain forest along streams full of spawning salmon
where Brown Bears fish in the shallow riffles known to us. These locations have been very
productive for many years and that's where we set up your evening ambush. Experience the
anticipation and sudden thrill when encountering these bruins up close. I promise you that this
hunt will be nothing short of exciting and also one of the most successful hunts.

These spring and fall Brown Bear hunts in unit 4 Admiralty Island National Monument are
organized to accommodate no more than two hunters per hunting trip. The third spring hunt in
unit 1C southeastern Mountain Range is for one hunter only.

By limiting these Brown Bear hunts to two hunters, one on one ratio and with eleven days to
hunt we can provide you with a quality hunt being selective taking only mature large male bears.
We know how to organize and conduct a hunt in a professional manner using top notch
equipment. You will be in good hands with guides who spend years hunting in the harsh weather
and rough terrain they know by heart locating brown bears and maintaining a high success rate
year after year. 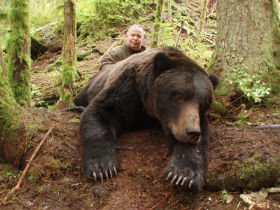 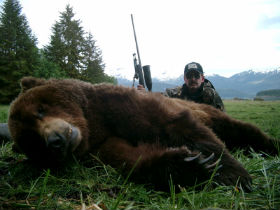 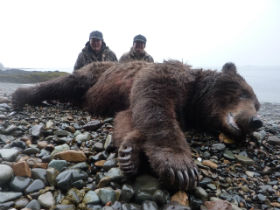 Black Bear hunting possible on 2. Spring Brown Bear hunt and on Fall hunt after both Brown
Bear been taken. Because of the area change from Admiralty Island to the Southeastern
Mainland there have to be at least 4 days remaining of the trip. There is a $2000 Trophy fee if
Black Bear is taken.
The 3. Spring Hunt is in Unit 1C Southeastern Mainland where both Brown and Black Bear
inhabit the area. Since it does not require an area change theTrophy fee is $1000
if Black Bear is taken.

Alaska hunting regulation state that any bear wounded and not recovered will count toward your
bag limit for that year. Please work on your shooting skills. After your arrival we check your
rifles for zero before hunting.

No more than two hunters per trip!
All hunts one on one!
References of last five years for ALL HUNTERS guided available upon request!