After a mild winter with low snow levels even in higher elevations spring came early to Southeast Alaska and also to the rest of the state. Brown Bears were out earlier than usual. It was sunny the morning of April 27 when we untied our 50 foot vessel Northern Star and headed out on our first hunt. Bears were out and most were more or less rubbed due to unseasonable warm spring conditions. Our hunters were Kevin Hunt and Bret Allen from Utah. We were sighting and stalking bears every day but didn't pull the trigger on the first bear until May 3 when Kevin and me got up on a nine foot boar courting a sow. Nataliia was with us with her film camera and captured the stalk and the taking of the boar all on video. Bret had to wait for his opportunity until May 7 the last day of the hunt. Him and Charly had many bear encounters but bears were either not big enough or too rubbed. Bret was a patient man with a good attitude taking everything in stride. After we moved to a different colder area he took a beautiful eight foot ten boar with the perfect coat the morning of May 7 on the last day of his hunt. Again Nataliia was there with her camera and got it all on film. We had time to start celebrating the hunt in the afternoon.

The float plane came in the next day on May 8th and took our new friends away and brought in two new hunters Joe Schandel from NC and Mark Patton from CA. Joe hunted successfully Mountain Goats with me two years before and was ready to try his luck on Brown Bear. Things were pretty lively as we started hunting on May 9th. Joe and me spotted a large boar at the end of a big flat the evening of the next day but we were not able to get close to him. We spotted him again the next day and Joe and me and Natalia filming got within 150 yards. We had a good rest and Joe fired. The bear briefly crumbled and the spun around and was gone into the woods. We just had time to mark the spot where the bear disappeared and dusk was onto us. Early next morning we started to track but found very little blood and then nothing. Just by instinct and sheer luck were we able to locate him dead a 1/2 mile into the dense woods. The bear was huge. He was so heavy we had to skin the paws and the head out so I was able to put the hide in my large pack and lift it on my back. Two days later Mark and Charly connected with a nine foot boar not too far away where Joe took his bear. Natalia also was around and videoed all. With having two Brown Bears down early into the hunt we decided to head for Black Bear country on the Southeast Alaska Mainland. Mark wanted to take a Coastal Black Bear while Joe was just happy to tag along. Cruising to the mainland took about a day and it didn't take us long to locate a nice seven foot Black Bear with a prime spring coat. We were fortunate to get within a 120 yards to an extremely wary boar when Mark downed him at last light with a well placed round. We were done hunting by May 14th and had plenty of time for hide work and a re-supply turnaround in town

We left town May 21 for our third hunt to the Southeastern Mainland. I only take one hunter on this trip so our new guests were Tim and Suzie Sundle. Suzie was the hunter and she was a crack shot with her .375H&H. Nice thing about the mainland hunt is you are able to hunt both Brown and Black Bear at the same time because it is home to both species. Two days into the trip Natalia spotted a big Black Bear across the bay on a grass flat. After a first unsuccessful stalk we were able to get a second time within 120 yards of the bear when Suzie took her shot. The boar took off into the woods before she could fire a second time. We found a little blood where he disappeared into cover. Being late we went after him the next morning and retrieved him. Having a prime spring coat and squaring 7'4" we were pretty happy. We saw and stalked many Brown Bears over the next few days but none were up to our standards as far as size and due to early spring conditions just about all were badly rubbed. Our lucked changed and we got onto a nice sized boar who was following a sow. We were in range set up and about to take him when he scented us and took off into the alders. We kept an eye on the sow and two days later we were able to spot him again romancing the sow and this time Suzie's rifle barked and he fell over dead. It was a solid eight and a half footer with a dark chocolate spring coat as good as they come. 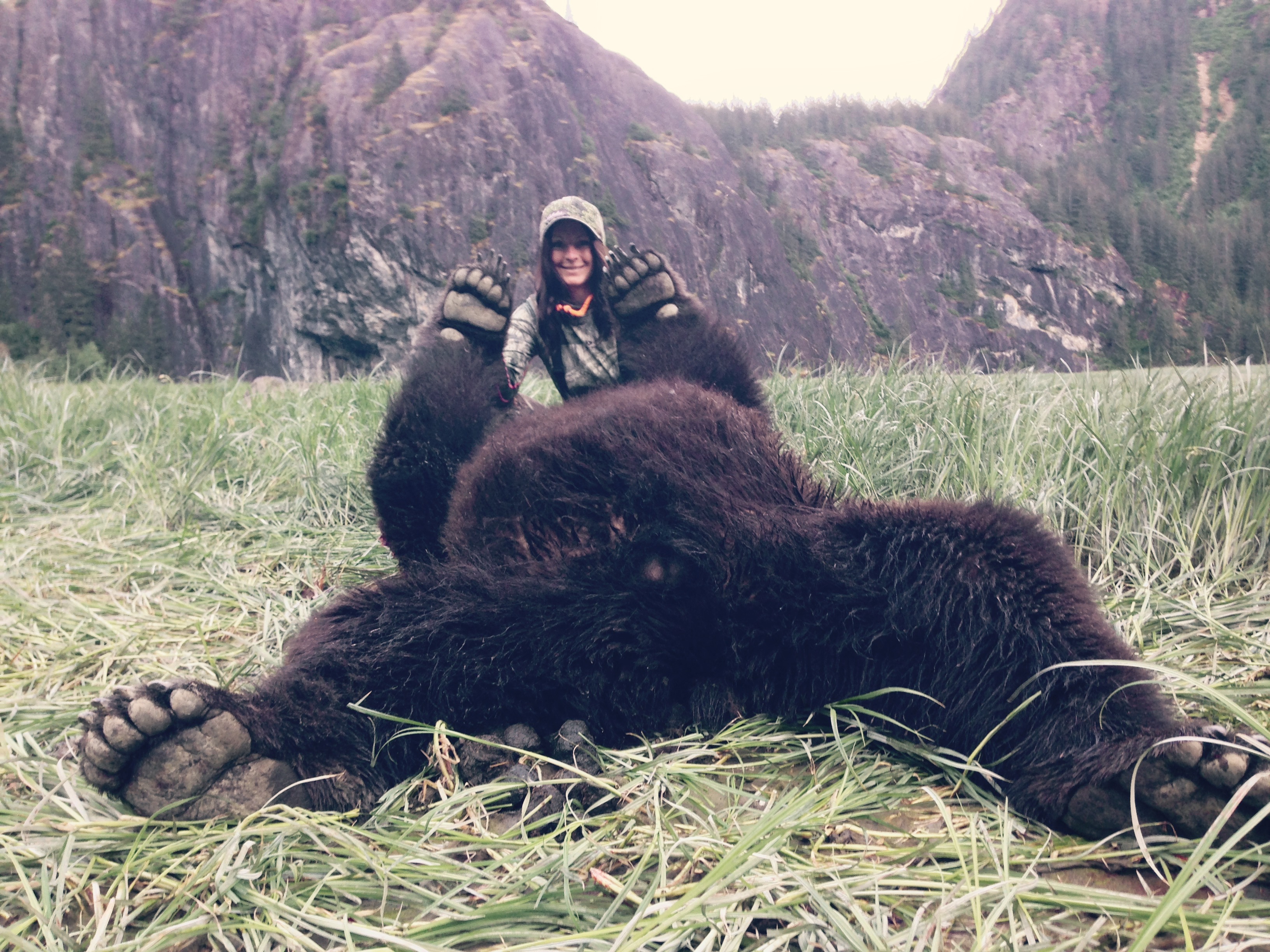 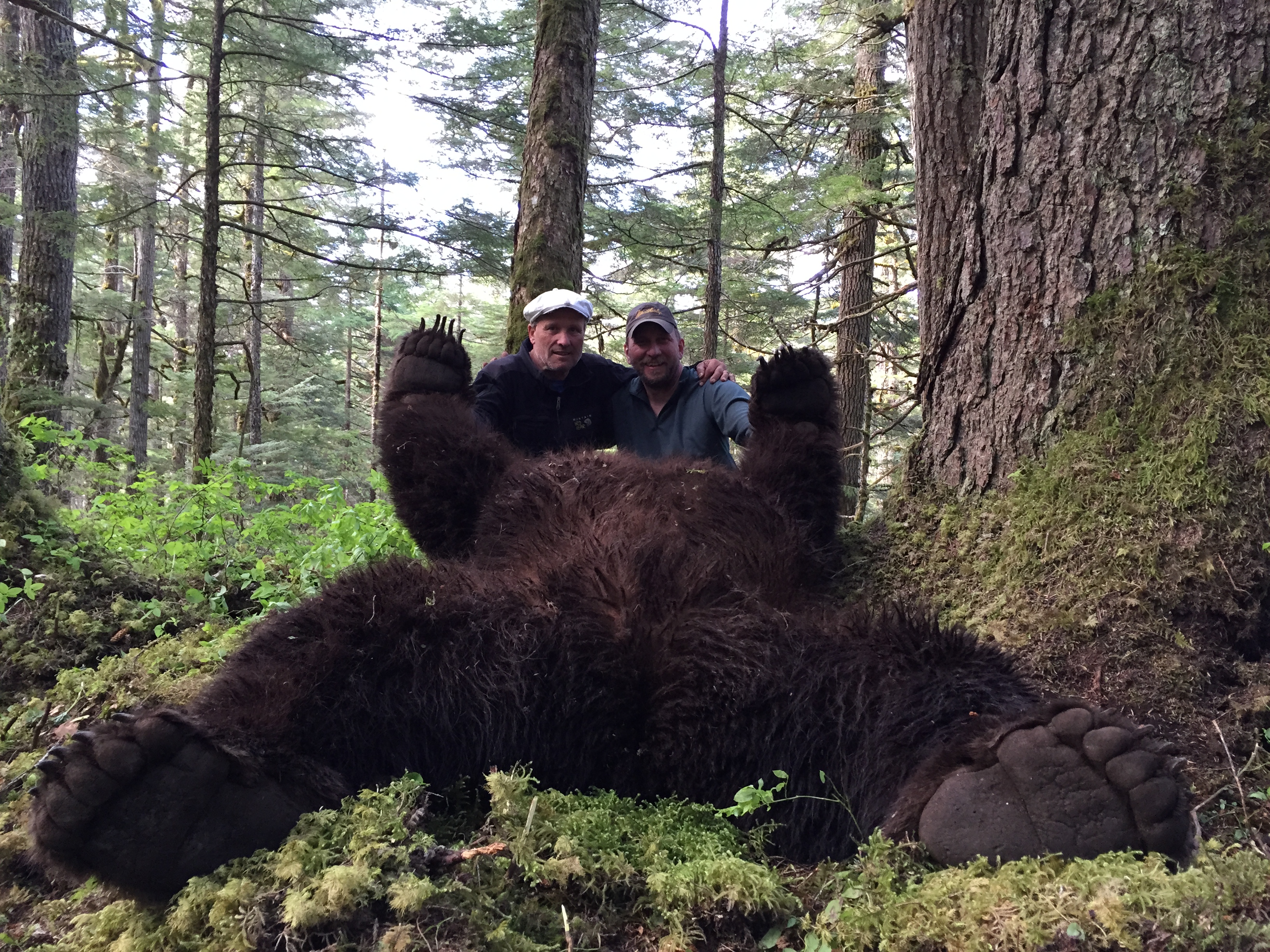 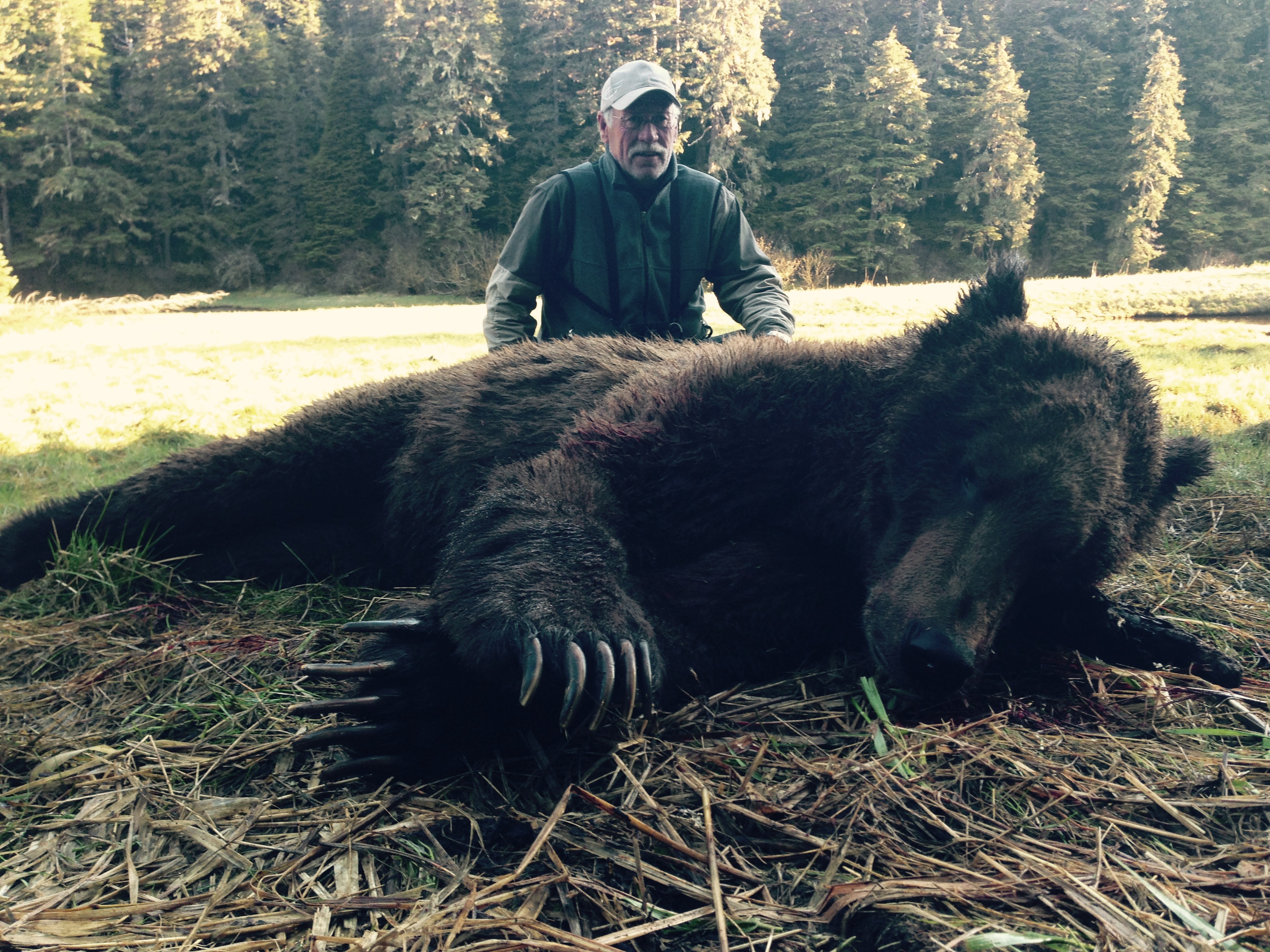